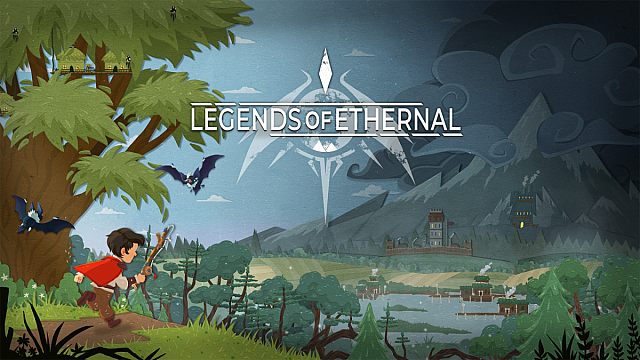 November 29, 2020 – With the 9th generation upon us with the release of the PS5 and Xbox Series S|X, attention has been diverted to what the new consoles can do for players and developers alike. Usually during this time titles fall through the cracks if they don’t carry the flagship name like Spider-Man Miles Morales, Demons Souls and DIRT 5. Looking to make sure that doesn’t happen, we made sure to experience many of these titles; one of which is Legends of Ethernal from newly formed developer Lucid Dreams Studios. Legends of Ethernal is a colorful, light-hearted experience with deep-rooted themes that are engaging and a welcome change of pace.

Everyone has heard the saying that it’s not about the end result, but the journey to those results something like that. Legends of Ethernal starts with the narrator giving you context on what happened to the World of Arkanys, which isn’t a happy tale. A terrible calamity known as The Uncovering lead to the eventual downfall of society and eventually the planet. Legends of Ethernal takes place six years before this horrid event and puts you in the shoes of a young boy named Wilfred, who lived a simple life with his mother and father without a care in the world. Upon returning home from fishing, he finds his home in ruin and his parents missing. Slowly starting to panic because his parents are missing and this is the first time, he’s ever been alone, Wilfred sets out on his adventure armed with his fishing rod in hopes he will be reunited with his love ones.

Upon setting out into the world; first stopping at the nearest village to see if the people know anything about what transpired, Wilfred gets his first taste of what the outside world is really like. Unbeknownst to him, this was his first of many shocking revelations that the world is full deceit and that everyone has their own interpretations of the truth. His actions are just; often times looked upon as a hero, however you soon find yourself wondering if those were the right actions to begin with. These opening sequences are what sets the top for this adventure and you love for the experience.

A staple you will find within this game is choice of difficulty. Developer Lucid Dreams Studio set out to tell a tale that is 2 parts action adventure, 2 parts storytelling; something that can be experienced by all. There is a total of five difficulty levels  Relaxed Mode, Easy, Normal, Hard and Hardcore allowing to fine tune you gaming experience. I found Normal to be the sweet spot for me, however I opted to try my luck at Hardcore Mode and I have to say, it’s certainly not for the faint of heart. That mode features a permadeath mechanic; which was certainly a turn off for me. Thankfully at the time of this article posting, a patch will be release in early December to help rebalance the modes and remove permadeath from the game. Regardless of the difficulty level, you will often find yourself getting hit a lot and at times dying when trying to jump over a body of water. Not due to you lack of skill, but because Wilfred has a slight learning curve which includes a stocky jumps that requires the right timing in certain situations to make the jump or dodge the attack. 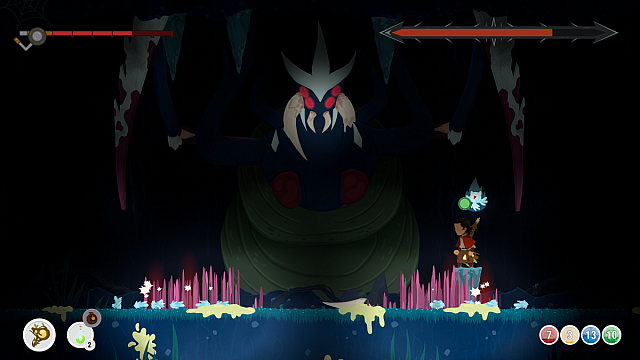 Wilfred as a character grows alongside your journey to find your parents. In the beginning he’s a naive young boy with a little bit of a short temper as he doesn’t understand the world he now partakes in. In the beginning your move set is limited to jumping, performing a dodge roll and wielding your fishing rod as a weapon. You will soon come across various types of Ether, which are tied to the elements and allowing you wield magical abilities healing, stun grenades and powerful melee attacks for both offense and defense use. Also, along the way you will acquire new weapons that let you diversify your approach like a blowgun and sword; however, they won’t have an immediate use until you advance further in the story. Your most important tool in your arsenal is the rolling dodge, which will get you out of harms way, while at the same time putting you in prime position to deliver a devastating blow.

Visually, the art style within Legends of Ethernal is complex yet simplistic. The environments you traverse are varied and play home to a unique cast of characters. Everyone you come across has their own unique personality and way of thinking. Layering 2D backdrops, you are given a visual depth that makes you perceive the word as a 3D space. The developer doesn’t shy away with utilizing the full color gambit; adorning the enemies with contrasting colors in order for them to stand out when compared to their backdrops. The soundtrack of Legends of Ethernal shouldn’t be ignored as it goes hand and hand with the storytelling, but more importantly helps to set the tone of the onscreen action, the environments being traversed and helps to convey emotion when there is no one speaking. I often found myself taking a break, but leaving the game on simply to enjoy the soundtrack and keep myself firmly rooted within the emotional makeup of the experience. 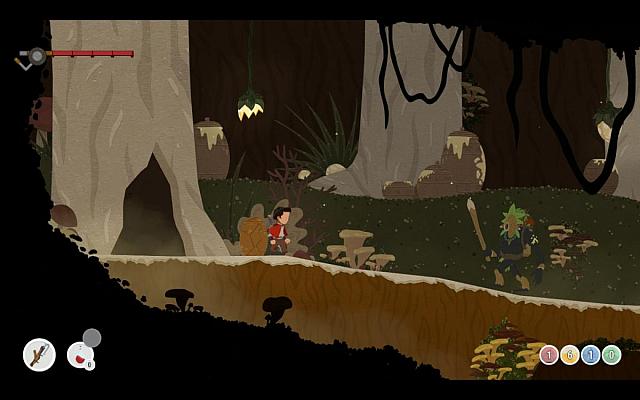 I will admit, in the beginning I found some frustration with the combat due to the learning curve fun tip, don’t attempt to play on the hardest difficulty on your first go around. With the charm and whimsical nature of the gameplay, you will come to enjoy the epic journey of Wilfred. With the dark realistic themes the game grapples with; you can easily see that developer Lucid Games Studio wanted to create an experience that players can relate to. This is a great first step for the promising developer. We look forward to their next experience.

Powered by WordPress | WP Newspaper by WP Mag Plus